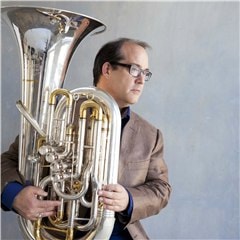 Dave Kutz is the solo tuba with the Netherlands Philharmonic Orchestra in Amsterdam. Arriving in The Netherlands in 2002 to work with the Radio Symphony Orchestra, Dave has since performed with virtually every major ensemble in the country including numerous engagements with the Royal Concertgebouw Orchestra, Concertgebouw Orchestra Brass, Asko|Schönberg, Radio Kamer Filharmonie, Doelen Ensemble, Radio Philharmonic Orchestra, Metropole Orchestra, Residentie Orchestra, as well as many international orchestras such as Zurich Opera Orchestra, Royal Flemish Philharmonic, Singapore Symphony, and the National Arts Centre Orchestra in Canada. Through his extensive orchestral work he has collaborated with some of the best conductors of our time including Marc Albrecht, Edo de Waart, Jaap van Zweden, Mariss Jansons, Neeme Järvi, Reinbert de Leeuw, Yakov Kreizberg, Peter Eötvös, James MacMillan, Philippe Herreweghe, and Michael Schønwandt.

Away from the orchestra, Dave is actively creating projects for the Netherlands Philharmonic Brass and Brass Quintet, and appearing as soloist when time permits. Dave has performed recitals on four continents and has been a guest artist at the International Tuba and Euphonium Conference, the Ottawa Chamber Music Festival and the Holland Festival in Amsterdam. Dave also performed in China, Australia, the United Kingdom, the United States (with the Royal Concertgebouw Orchestra), and in Brazil at the International Winter Festival at Campos do Jordaõ.

An energetic and successful educator, Dave holds the title of Doctor of Music from Northwestern University in Chicago and has studied with Rex Martin, Gene Pokorny, Dennis Miller, Nicolas Atkinson, and the late Arnold Jacobs. Before moving to The Netherlands, Dave served on the music faculties of several universities in the United States and Canada; currently he is active as a teacher, ensemble coach and audition mentor throughout The Netherlands. Dave is a Yamaha International Artist and Lätzsch Cimbasso performing artist.